Pro Arte - For the Artist in all of us

Founded in the UK in 1973, Pro-Arte has provided artists with some of the best brushes in the world for over 30 years. Dedicated to continued progression, the company is always on the look-out for new materials, new techniques and tools to improve their range. Testament to their quality is their enviable record of collaboration in brush development with artists.

Pro-Arte was born from the abmition of Roy Thompson to make and sell the best brushes in the world. With help from his son, Peter, the company has received wide acclaim and produces some of the most widely used artists' brushes today. The process at Pro-Arte is continuous; they are always on the look out for new techniques and materials to inform their product range. The company also works closley with professional artists to develop brush ranges that complement their techniques and styles.

Since its inception, Pro Arte have investigated the highest-quality synthetic alternatives to sable. This research was driven by the inconsistency seen in natural hair brushes. The quality of natural hair, most notably sable, is determined by habitat, climate and environment. Each of these three determining factors is highly variable, which means that natural hair can vary greatly in its quality. 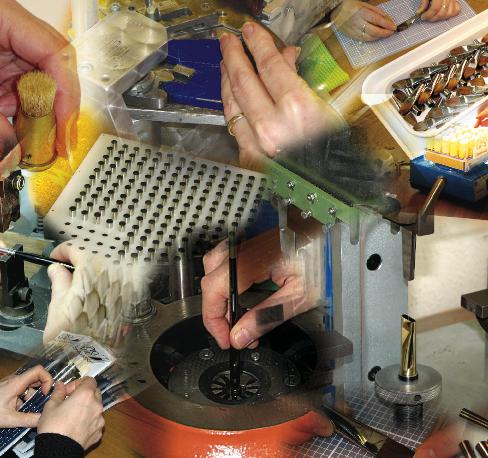 After much research, Pro Arte made a breakthrough with a synthetic polyester filment and this revolutionary fiber changed synthetics forever. Crowned as the 'Prolene' series, the brushes made from this new synthetic were distinguished by a black handle tipped with gold. It was, and still is, able to mimic the working properties of sable, offering exceptional spring and colour carrying capacity. The illusion follows through to the colour of the brush, which is similar to that of genuine sable. All similarities end there; you will breathe a sigh of relief when you see that the price of Prolene is much less than a sable equivalent! Later on in their brush development, the Prolene Plus range was born, offering a refined version of the original with lacquered wood handles and gold ferrules.

The company's next breakthrough came from the desire to combine natural and synthetic hair in one brush. Pro Arte worked tirelessly to find the optimum mix of hair and the resulting brush was the 'Connoisseur' range. Combining the best of both worlds, this range proved instantly popular, and is recognised by its black handles with a magenta and white tips.

From the beginning Pro Arte also offered a range of Chinese Hog bristle brushes suitable for oil painting. With the growth in popularity of acrylics, it was soon realised that the diversity of this medium required a brush that was a little different. Pro Arte made another synthetic discovery in the form of Taklon fiber. Full of strength and spring, these filaments formed the basis of the new 'Acrylix' brush range. The range was expanded, due to demand, to include long-handled variants and a white nylon range called the Series 201 Sterling Acrylix. Universally acclaimed, these brushes offer amazing versatility for almost any media.

There are, of course, traditionalists who prefer natural hair brushes. Pro Arte source only high quality sable in order to create brushes that pay homage to the past. This idea saw the creation of the 'Renaissance' range, finished in British Racing Green topped with gold plated ferrules.

To find out more about the brushes in the Pro-Arte range, select a sub-topic below.

Click here to see our range of Pro-Arte Brushes