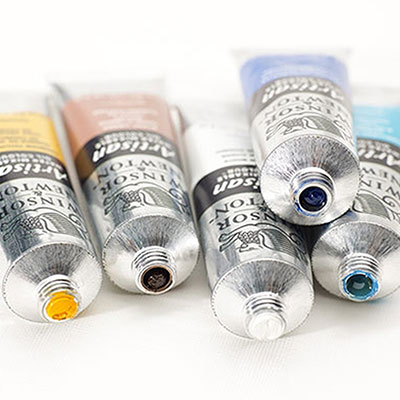 Artisan Water Mixable Oil Colour has been specifically developed to appear and work just like conventional oil colour. Traditional oil colour has a rich, thick, buttery quality fresh from the tube and is an exceptionally popular medium due to its versatility, offering the artist excellent results from the time-honoured techniques of blending and glazing, impasto and scumbling; the exact same can be said of Artisan.

Like traditional oil colour, ArtisanWater Mixable Oil Colour is made from linseed oil and safflower oil.The only difference is the linseed oil and safflower oil used in Artisan have been modified so that they will mix and clean up with water. Artisan has been specifically developed to appear and work just like conventional oil colour.The depth of colour, buttery consistency, lightfastness, opacity/transparency, performance and drying times of Artisan, allow artists to use this range for all oil colour techniques.

The key difference between Artisan Water Mixable Oil Colour and conventional oils is its ability to mix and clean up with water. Artists using conventional oil colour will require the use of solvents such as turpentine or white spirit (mineral spirits), Artisan on the other hand can be thinned with water for painting and all brushes and equipment cleaned up with soap and water only; the use of hazardous solvents is not necessary. As a result, artists can enjoy a safer painting environment, and combined with the hints and tips in this leaflet can develop a safer studio practice.

Artists using conventional oil colour will require the use of solvents such as turpentine or white spirit (mineral spirits) for use when painting and for cleaning up their materials.

Artisan does not require any hazardous solvents for cleaning up after painting. After use, just wipe excess oil colour from the brush and use soap and water to clean. As with all paints, it is advisable to clean up on the same day to keep your brushes in good condition. There is no need to use solvents such as turpentine and white spirit (mineral spirit). You may also use Artisan Thinner to clean your brushes and equipment, followed by soap and water. You may find this useful with any stubborn colours.

This means that the use of hazardous solvents is not necessary with Artisan and as a result, artists can enjoy a safer painting environment.  With this in mind, Artisan is ideal for:-

Winsor & Newton have 175 years of experience in the making of oil colours.

The choice of raw materials, formulation and manufacture of Artisan colours reflects this experience and produces a product of absolute excellence.

There is no water within the formulation of Artisan. The linseed oil and safflower oil vehicles have been modified to allow the colour to accept water, creating a stable emulsion, while retaining the working characteristics of conventional oil colour.

The range has also been formulated with a high proportion of single pigments for brilliance of colour and clean colour mixing.  The most suitable oil and methods for dispersion have been selected to bring out the individual characteristics, from opacity to natural transparency, of each pigment in the Artisan range.

A wide variety of pigments are used in Artisan to provide all the characteristics expected from a Winsor & Newton oil colour:

Opaque colours provide covering power and flat areas of colour whilst transparent colours give depth to the painting.

One of the greatest strengths of Winsor & Newton is the colour spectrum provided.

The Artisan colour range has been chosen according to mass tone (colour from the tube), undertone (bias of colour when in a thin film), strength and relative opacity. Each colour has been specially selected looking at individual pigment characteristics. The resultant colour spectrum of 40 colours is spread around the colour wheel to ensure that as many colour positions and mixtures are possible.

The series indicates the price of colour - mostly determined by the cost of obtaining and refining the pigment, e.g. Series 2 colours are more expensive as they contain genuine Cadmiums and Cobalts.

Your initial palette should provide a wide colour spectrum and should have a good balance between transparent and opaque colours and between strong tinting and weaker tinting colours. We therefore recommend the basic Artisan palette of:

Restricted palettes are used by both beginners and serious painters to develop their understanding and use of colour. The six colour system uses two reds, two yellows and two blues as a ‘primary’ palette. This provides both a blue shade red and a yellow shade red for example, which will ensure clean violets and clean oranges from your palette. In Artisan these six colours are: Lemon Yellow, Cadmium Yellow Hue, French Ultramarine, Phthalo Blue (Red Shade), Permanent Rose and Cadmium Red Hue. The additional colours recommended in the basic palette introduce a wider range of tones and greater variation in opacity and tinting strength.

Artisan has the short buttery consistency expected from a Winsor & Newton oil colour, a consistency that is a careful balance between the pigment and the oils used in the formulation (modified linseed and safflower). This is the traditional consistency of oil colours, and as such allows the artist a broader variety of techniques, the colour can be thinned as required. 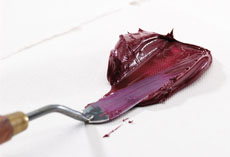 The reflective quality of the Artisan film is affected by a wide variety of factors. Because each pigment requires differing volumes of oil in formulation, the surface sheen may differ slightly from colour to colour. The addition of water as a solvent, as well as the use of additive mediums will alter surface sheen as well.

Most artists want to be sure that their colours are permanent.  Recent pigment developments have led to continued improvements in the lightfastness of artists' colours.  These improvements have been utilised in Artisan.  All Artisan colours are rated AA or A and are recommended as permanent for artists' use.  (see also Artisan Durability in Further Information)

When Artisan is thinned with water, the water evaporates from the paint film fairly rapidly, leaving behind a conventional film of oil that dries by means of oxidation. The different drying rates of Artisan colours are due to the different reaction of each pigment when mixed with oil. Winsor & Newton formulate each colour individually to optimise its drying rate, helping artists to avoid the problems of slow drying underlayers. However, the following list is a guide to the likely variations:

Using Water as a Solvent

As with any oil colour, the addition of too much solvent can result in an underbound paint film. The same is true when using water with the Artisan range. For this reason we strongly recommend that the working characteristics of the colour be adjusted through the use of the appropriate medium in addition to water. When adding water, do so gradually, a little bit at a time, while mixing continuously with a brush or palette knife. Doing so will allow the water and oil emulsion to form evenly.

The use of water will also alter the refractive quality of the colour - resulting in a slight shift to a lighter tint as the water is added. As water evaporates from the mix, there is a subsequent reversion back to the original colour. Alternatively, you can use Artisan Thinner instead and the colour shift will be avoided.

Which Whites to Use

White is the most popular colour.  Adding white to any other colour produces ‘tints'.  The two whites in the Artisan range offer different working characteristics.  Titanium White is the most popular modern white.  It is the whitest, most opaque white and gives excellent covering power.  Zinc White (Mixing White) is the most transparent white, making it ideal for stronger tints and glazing.  Artisan whites are ground in modified safflower oil to produce the whitest whites.

Extensive Underpainting/ Priming with White
Artisan whites are not recommended for these purposes because they are made with the slower drying safflower oil.  For extensive underpainting we recommend Underpainting White from Artists' Oil Colour.  Remember however, water cannot be used with this product.

Oiling out replaces any oil which has been absorbed by the previous layer. Wipe Artisan Painting Medium sparingly into any dull, sunken areas of the painting with a lint free cloth. Wipe off any excess oil and leave to dry. Repeat until the area has an even sheen.

Conventional painting over an Artisan Underpainting

We recommend using Artisan throughout the painting as it may be difficult to maintain fat over lean by moving to a conventional oil colour in later layers.

ArtisanWater Mixable Oil colour is a relatively new medium in terms of art materials, however, colours containing oil and water are not new and have in fact existed since prehistoric times. For example, egg tempera is an oil in water emulsion – and this has been used by artists for over 600 years.

During the development process, Artisan colours were tested for many properties that would be indicative of its durability such as adhesion, flexibility, drying, film hardness, water resistance - as well as application properties such as mixibility with water, flow, texture retention and wetting. In addition, the full range of colours were painted out on canvas directly from the tube and with mediums and/or water at different thicknesses and have been observed and tested at regular intervals since. All results from this development stage have confirmed that Artisan does indeed act in the same way as you would expect from a conventional oil colour.

Evaporation of water from film
Artisan dries in the same way as conventional oil colours, by means of oxidation. Artisan films which have been diluted with water have been shown to be free of that water within the first weeks and months of drying. The drying process continues by oxidation as it would with a conventional painting.

Adhesion and Flexibility
Adhesion and Flexibility are probably the two most important properties that will give an indication of the long term durability of a paint film. Poor adhesion will be detrimental as will poor flexibility, as a rigid paint on a flexible surface will tend to crack. Extensive tests by Winsor & Newton R&D chemists have concluded that both the flexibility and adhesion are very similar to that of other Winsor & Newton oil colours.

In combination with the work carried out to date and the ongoing studies, there is further analysis taking place in various conservation departments across the world.

See our range of Artisan Paint