The two runners up are Krisztina E Lencses and Michael Sheldon.

Congratulations to our winners, and thank you to all who took part!

Jackie Garner’s art is inspired by wildlife and created with watercolours and acrylics. Originally concentrating on her local Gloucestershire wildlife, she later incorporated other species, inspired by travels in the UK and then trips to the Falkland Islands, Egypt and India.

Jackie exhibits regularly, and has held solos shows in Gloucesterhire (Cheng-Kim Loke Gallery at WWT Slimbridge, and Nature in Art Gallery and Museum, Gloucester) and in London (Westminster, Tottenham and Bloomsbury). She also takes part in group shows such as the Society of Wildlife Artists, the Royal Society of Painters in Water Colours, and the Lloyd’s Art Group in the City of London.

Notable Commissions include the 2015 Wildlife Habitat Trust Conservation Stamp and the cover design for the 2014 Birdwatcher’s Yearbook. Jackie was delighted to be invited to be guest artist at the 2015 Uttar Pradesh Festival of Birds, India.

Encouraging creativity in others is important to Jackie. In addition to a programme of talks, demonstrations and workshops, she is the author and main illustrator of The Wildlife Artist’s Handbook, and a regular contributor to Leisure Painter magazine.

Jackie’s latest acrylics show her fascination with pattern and texture in the natural world. This takes the form of wildlife camouflage, or semi-abstracts and textured panels based on naturally occurring patterns, such as rock formations, shells, ripples and fungi.

Look out for Jackie's painting on the cover of our next catalogue - out in October!

Krisztina E Lencses is a Hungarian self taught artist currently living in the South West of England. She has started widening her subject field and has discovered a passion for painting wildlife.

Over the years her style has developed and improved and now she specializes in realistic paintings, working primarily with oil and acrylic. Her other love is photographing animals and is always on the look out for “magical moments".

Krisztina then selects one of these images, at first captured digitally, to be brought to vibrant life on canvas. She is striving to create something that inspires others, to appreciate the beauty of the natural world.

Krisztina currently is increasing her portfolio of wildlife paintings and offers not only the original paintings but also Fine Art Giclée prints.

Hailing from the Wirral and now living in London I am a self taught Verism artist painting mainly portraits in oil and pastel.

I served just over 8 years in the Royal Marines and conducted 2 tours of Afghanistan. After leaving the Corps I went into the private security sector and spent 3 years protecting merchant vessels from the threat of pirates. During this time I would take small canvasses out with me and this rekindled my love of art again.

I only started taking painting seriously again in November 2017 and subsequently received my first set of oil paints as a Christmas present. Since then I have never looked back. It’s often been a struggle trying to adapt to Civvy Street and this can often be reflected in my artwork.

This oil painting was painted on aluminium panel using only Titanium White and Ivory Black oil paints over a timeframe of 3 months. I want the viewer to decide what the person was thinking or feeling. Is he in pain? Is he in torment? Is he relieved? Is he at peace? Those weathered hands, which tell a tale.

I like the way the painting means something different to everyone, usually the word powerful is mentioned.

I’m obsessed with the varied skin textures and intricate detail, which is in all my paintings. I felt the stripped back monochrome added to the dramatic chiaroscuro effect. I focused on the finer detail, studying my own hands, as you would never really look at them, noting how the light catches the cervices and pores, the intricate mapping of the skin.

If you would like to see more of my work I currently have one of my paintings in the Ruth Borchard Self Portrait Exhibition which is on until Friday 11th October at Piano Nobile, Kings Place, 90 York Way, London, N1 9AG

I am a professional artist born in London. I moved to Bedfordshire in my childhood and it was at this time I realised I had a passion for drawing and painting. Whilst at school, aged only 12, I was inspired by my art teacher. She built my confidence and guided me through my exams. I went onto complete an art foundation course on a path destined for university. Unfortunately my tutor’s seemed to knock all of the creativity out of me. So no university for me!

I started working full time, in a non creative role. It wasn't until I was in my mid 20’s that I picked up a paint brush again, painting when I could in my spare time. Then my children came along, concentrating on them I wasn't able to make the jump and work as an artist full time so again my passion was put on hold. With a supportive family around me I was able to take the leap of faith a year and a half ago and become a full time professional artist.

I am self-taught, driven by my admiration of nature and its elegance. I predominantly work in oil paint and pencil and I use precise and deliberate strokes to produce representational pieces of work. I am best known for my bright but calming, accurate and detailed paintings and drawings of people, wildlife and natural surroundings. I thrive on the powerful emotions that my art triggers and the happiness of others when I reveal a new piece of work.

Alfred was a pleasure to paint. I loved painting his fur and getting the beautiful look in his eyes! I wanted Alfred to pop, so I used a metallic gold oil paint for the background, it is very difficult to take a photo of him to show the full impact of the gold. When I name my paintings I ask for suggestions on social media, I generally choose peoples names which are full of character.

I was chuffed when a few people suggested Alfred for this painting. Alfred was my grandad's name so I thought it suited him perfectly. My grandad was such a funny man.....always the joker! But unfortunately he developed dementia at the end of his life which was devastating for the family. I thought naming this painting after my cheeky grandad was so fitting, partly because of his character but also because of the innocence in his eyes which appeared when dementia crept in and then took over. I also think he would find it hilarious that a painting of a gorilla is named after him!!

Jane lives in the Pennine village of Delph, north of Manchester, where she was born and grew up. She has always had a natural affinity for horses and began riding as a young child. Her love for drawing and painting them also started at an early age, but only recently, after a break of 40 years, did she start to paint again.

Although Jane completed the Foundation course at Manchester College of Art in the early 1970s, she went on to lead a busy life as a Primary School teacher for 23 years and later, ran her own saddlery and country clothing business for 15 years. Throughout this time she also competed in eventing and dressage with her own horses. Now, with the competition years over, and the horses gone, she has returned to painting.

She has exhibited locally and nationally since 2014 and has won awards for her work. She enjoys the challenge of portraiture and painting figures in the context of cityscapes however, painting horses in a variety of situations such as racing, polo and eventing is where her heart truly lies.

She uses oils and sometimes charcoal to explore her interest in light, form, space and movement. Her aim is to catch that elusive fleeting moment which tells a story, without sentimentality. 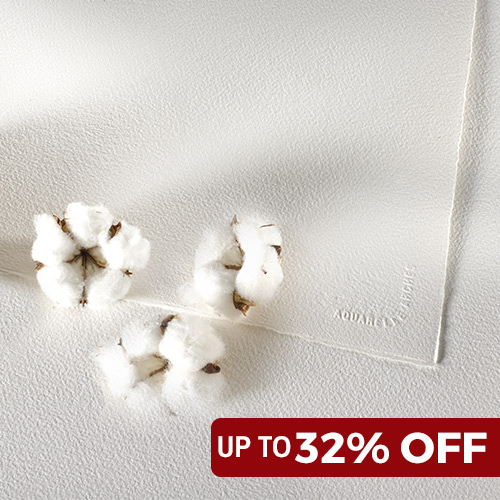 up to 32% OFF Watercolour Paper 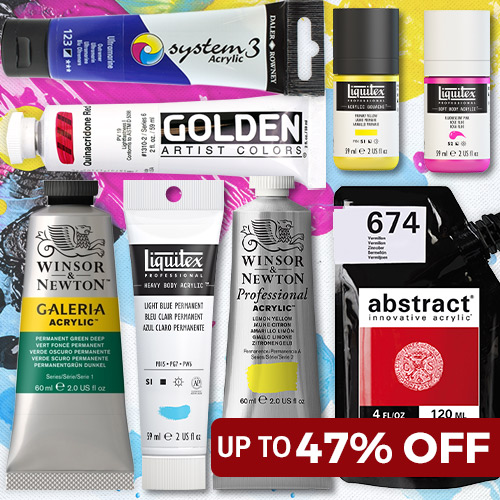 Up to 47% OFF Acrylic Paint 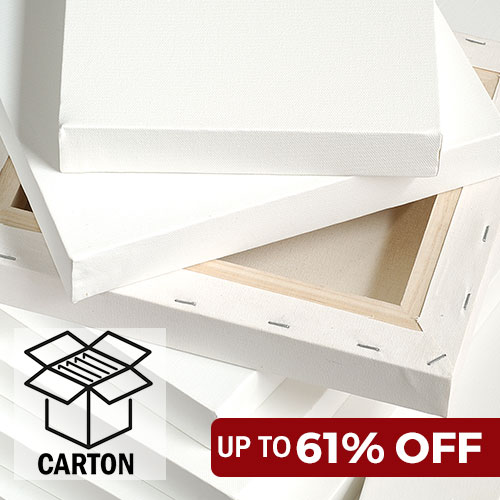 Up To 70% OFF Canvas Cartons 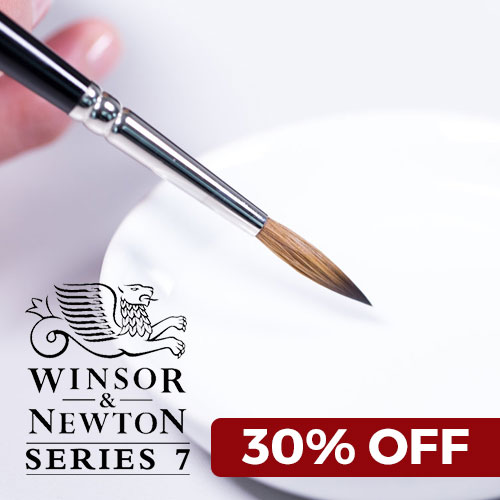 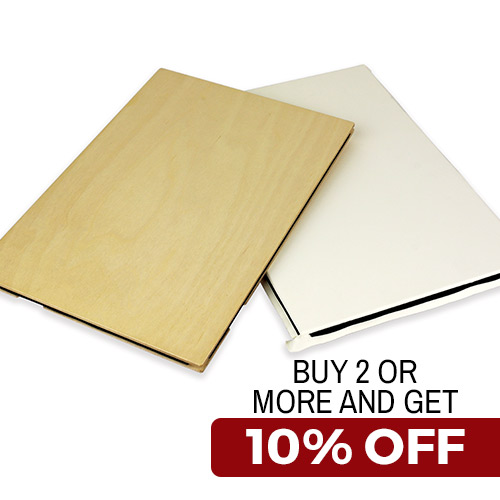 10% OFF Perfect Paper Stretchers when you buy 2+