Life Through the Eyes of Frida Kahlo 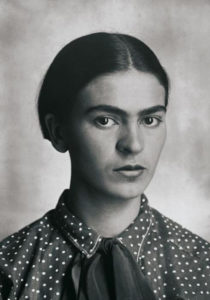 Born in 1907 at the family home in Coyoacán, just outside Mexico City, Magdalena Carmen Frida Kahlo y Calderón had a complicated childhood, marred by polio which left her disabled at the age of six years old. 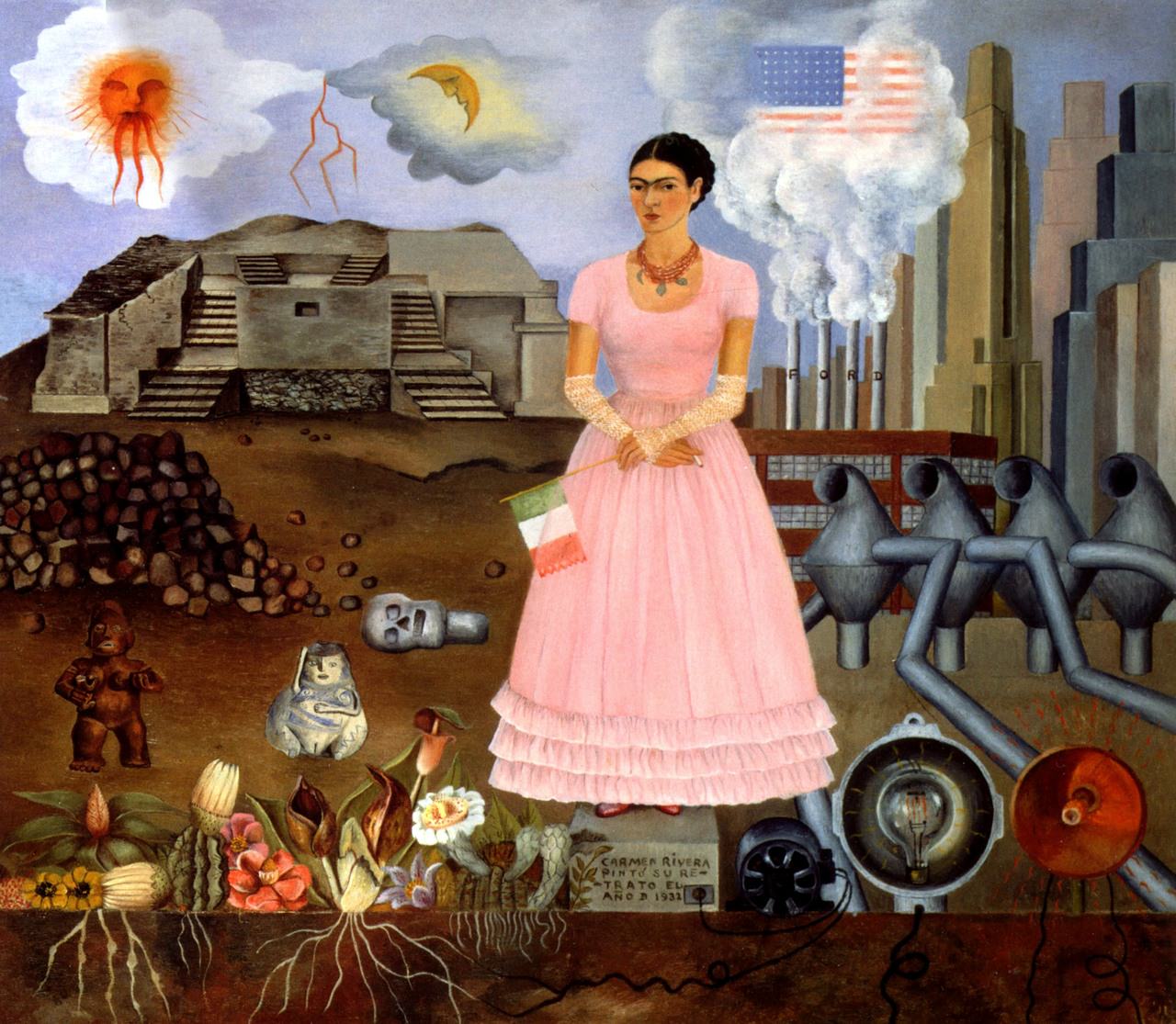 The daughter of German photographer Guillermo Kahlo and Matilde Calderón y González, Kahlo was far closer to her father, who encouraged her to do sports and taught her about literature, photography, nature and philosophy. Her mother and father had three other daughters, and Kahlo also had two half sisters from her father’s previous relationship. Of all the girls, Kahlo was the only one not to be schooled in a convent.

The polio incident left Frida with one leg shorter and thinner than the other and meant that she had to start school later than her peers. She struggled with her early school years, being expelled for disobedience from one school and leaving another due to being sexually abused. She was eventually accepted at the National Preparatory School where she excelled with dreams of becoming a doctor.

Fernando Fernández was a family friend who introduced Kahlo to drawing at a young age. When she began to look for a part time job to supplement her medical studies, he employed her as an engraving apprentice at his printmakers. 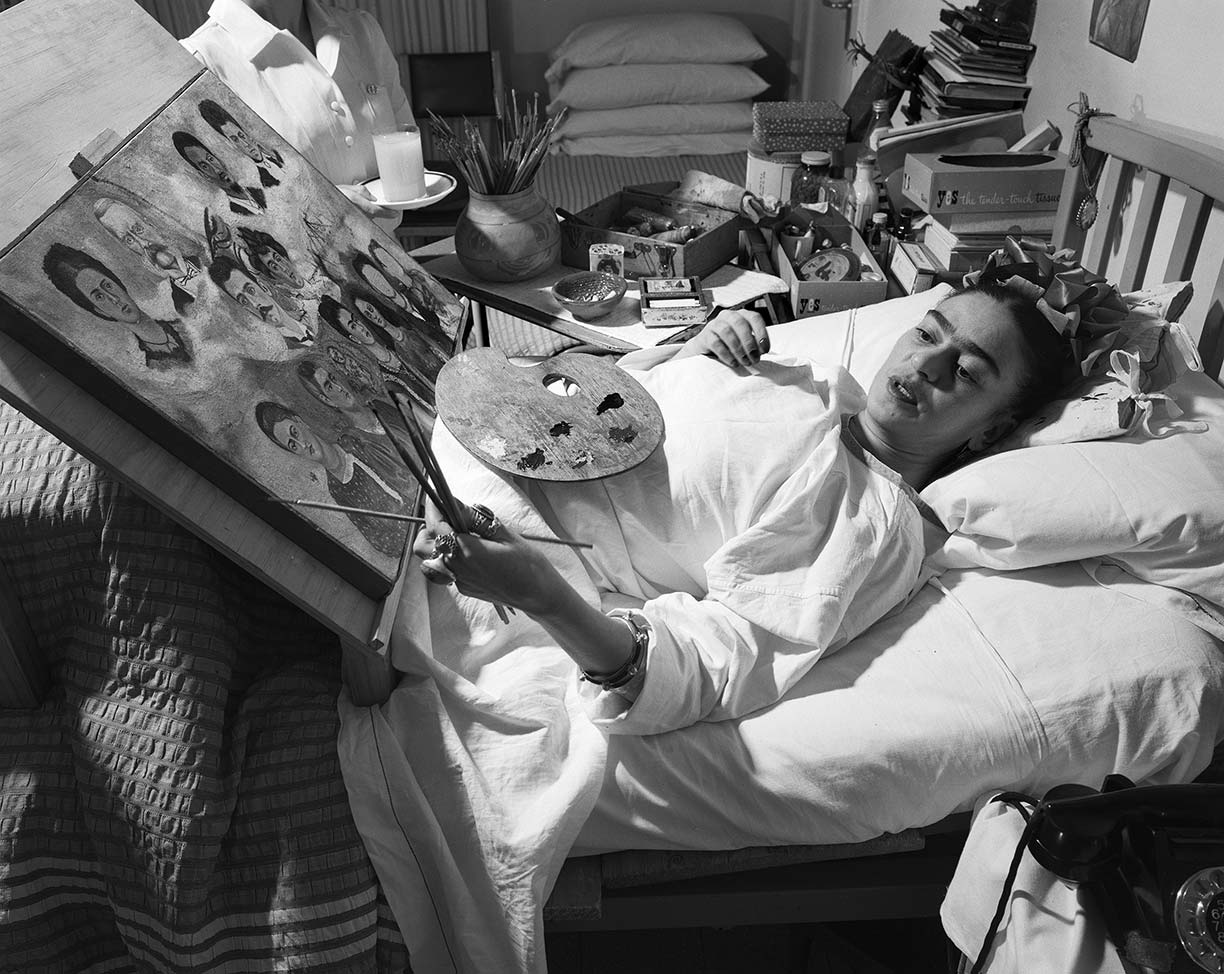 In 1925, Kahlo’s career came to a standstill when the bus she was on collided with a car and caused her near fatal injuries. Confined to bed for three months and with chronic pain that would last the rest of her life, she channelled her frustration into art. She had an adapted easel that allowed her to paint from her bed and spent her time committing the images of her friends and family to canvas. 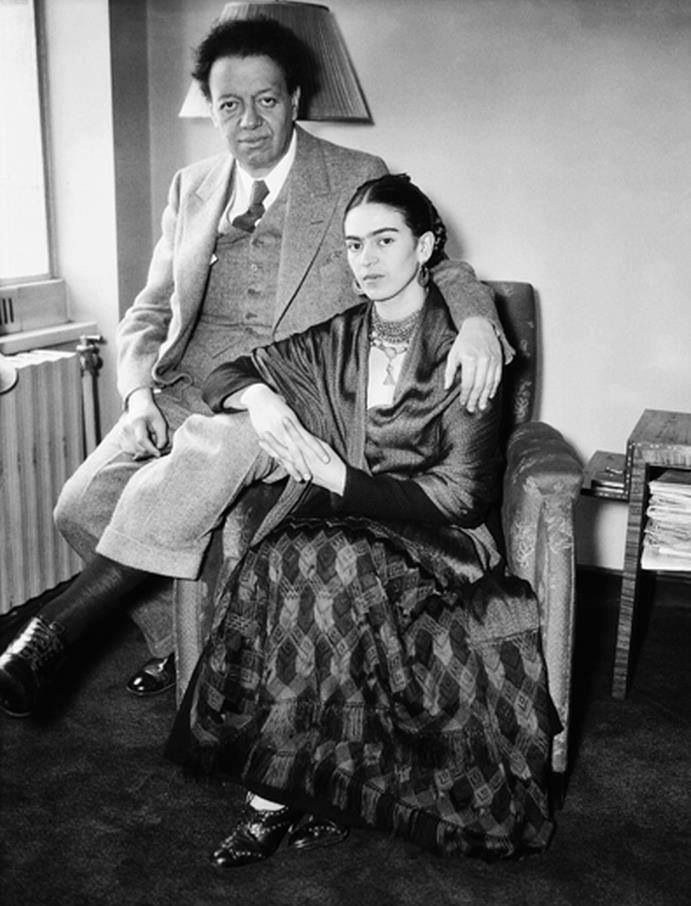 It was not until years later, when she was married and travelling with her husband, Diego Rivera, a successful artist, that Kahlo began to paint portraits again. Some of her works were shown alongside her husband’s in an exhibition in San Francisco, but she continued to travel alongside him as his partner, rather than an artist in her own right. 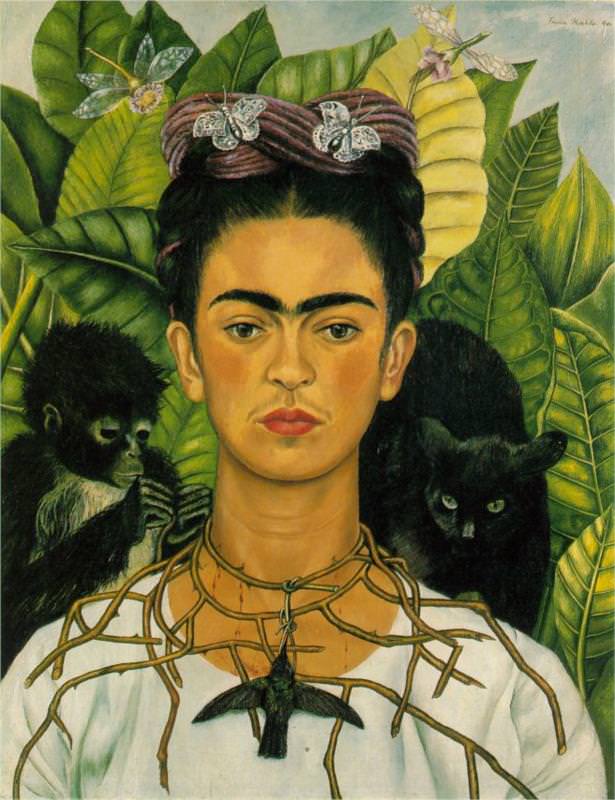 In her career, Kahlo painted around 55 self-portraits, most of them intended to depict the pain she had suffered throughout her life. One of the most poignant is arguably The Broken Column, which shows Kahlo naked aside from a plaster corset and a blanket, and with a steel column in place of a spine. Almost certainly a nod to the bus accident which ravaged her body, some have also suggested there is a sexual reference to this image. 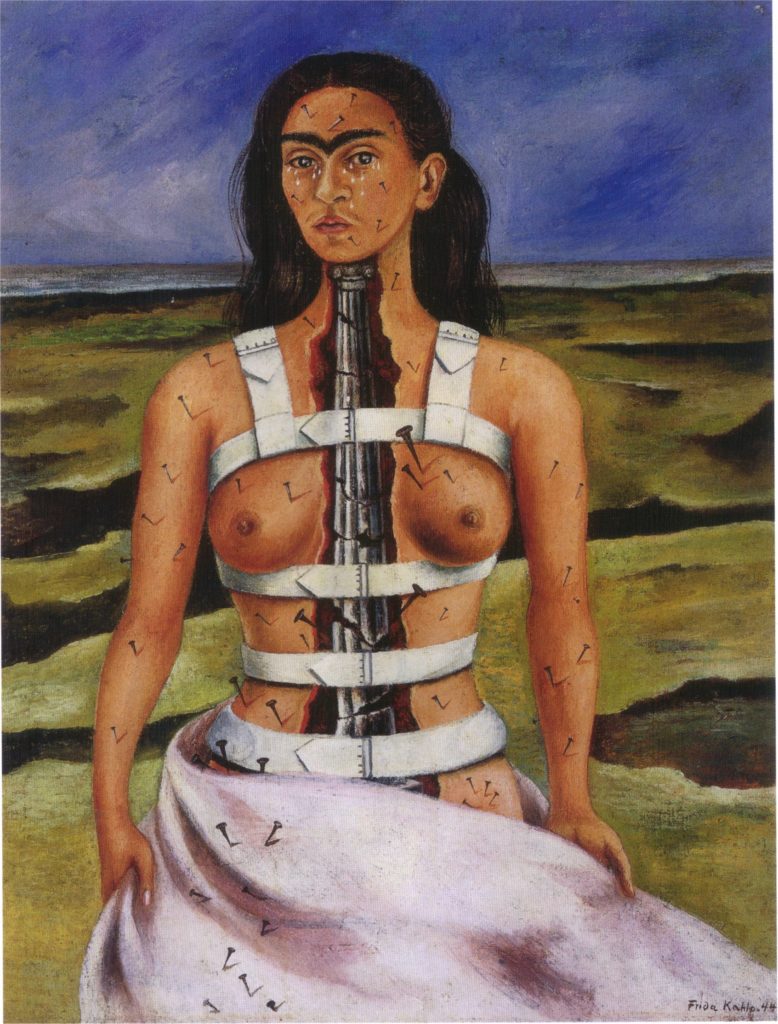 Many of her self-portraits have a theme of love and heartbreak through them, which some believe reference her marriage to Rivera. He had multiple affairs during their relationship and Kahlo used art as an expression of her distress. Memory, the Heart, was painted shortly after Rivera’s affair with Kahlo’s younger sister Christina and shows an arrow through her chest and her large heart beside her on the floor. 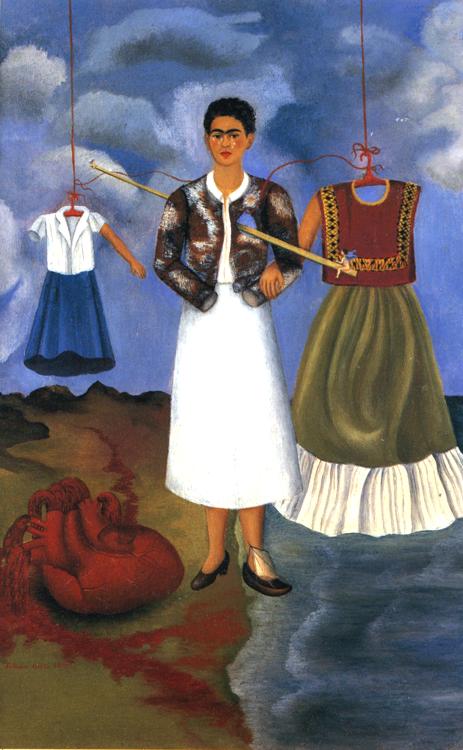 Her hair also tells a story through her portraits. In this picture, her hair is cropped and in another, Self Portrait with Cropped Hair, she is shown cutting her long tresses. This was apparently a reaction to Rivera’s affairs, as he loved her silky long hair. 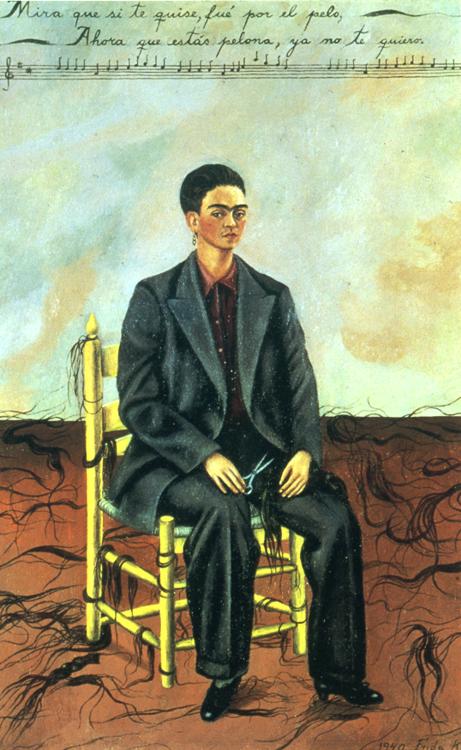 An Icon for All

Kahlo has often been considered to be both a feminist and gay icon. Despite her marriage to Rivera, she was very open about her sexuality and would often use other people as a way to get back at her husband for his infidelity. She would sleep with his female conquests or choose men that she knew would make him extremely jealous. In the end, the couple agreed to an open marriage. 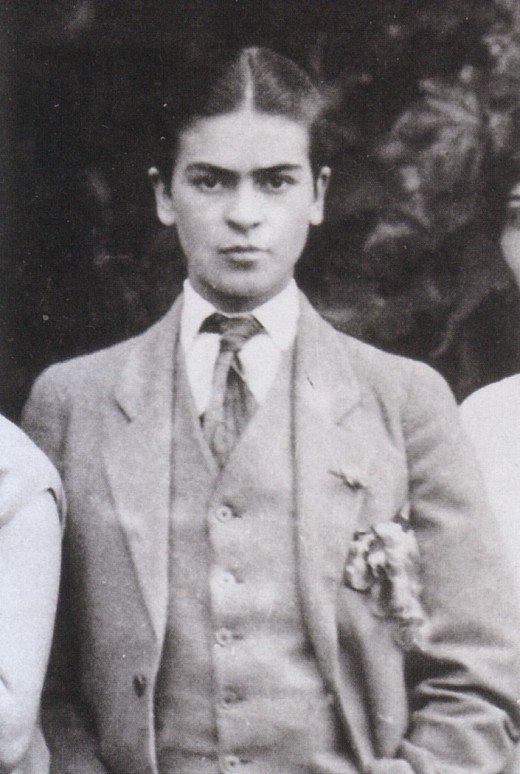 However, it was her admittance into a co-ed school that really paved the way for her to stand out amongst women. There were only a handful of other girls at the school and she was known for wearing men’s clothes and challenging them to tequila-drinking contests. She fought against feminine stereotypes, embracing her bold eyebrows, refusing to shave her armpits and wearing loose clothing and accessories when the fashion was for more fitted clothing. She was also very vocal about her political beliefs.

Her feminine views are evident in her paintings, which were considered shocking at the time but were intended to document the sufferings of women. 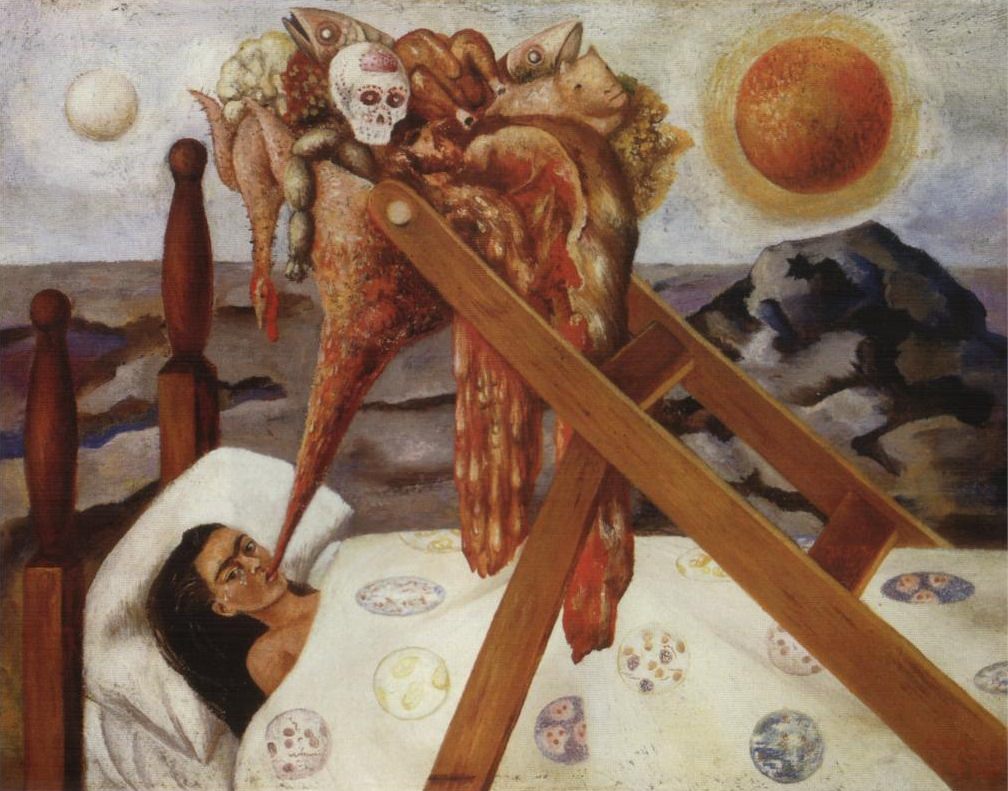 Kahlo’s last years were severely hampered by illness which left her unable to walk without assistance. Her first solo exhibition was held in 1953, which she was driven to in an ambulance and propped up in a bed while her guests partied around her.

Later that year, she underwent an amputation operation on her knee and became severely depressed. When her husband had yet another affair, she attempted suicide through overdose. On 13th July 1954, she was found dead in her bed, with doctors stating a pulmonary embolism. No autopsy was ever carried out and some believe that she had deliberately taken another overdose. Her final drawing was of a black angel, as if she knew the time had come. It was accompanied by the last words she wrote, “I joyfully await the exit — and I hope never to return — Frida”