How I Discovered Art As A Therapeutic Goldmine

As part of Mental Health Awareness Week, we caught up with artist KaliDinosaur (Kalina Nowak) who tells us about how she discovered art as a therapeutic goldmine:

In a recent survey by ArtSupplies.co.uk it was revealed that the British public voted art outside the top 10 as an activity to best help reduce stress. And quite frankly I’m flabbergasted.  I say this, because it’s saved my life and my sanity numerous times. What better way to express your emotions than splashing them all onto a blank canvas and letting your thoughts translate into creativity?

You may look at my work and think, yes but you’re an artist so of course you support this.  Well I wasn’t always an artist, in fact for a long time I shied away from practicing it.  I was encouraged to undertake it as education, or pursue it in a creative course.  But being young, naive and unsure what everyone was talking about, I decided I’d rather learn something I didn’t have a clue about, rather than follow something I’d already tried.  So I abandoned art and selected science.

After a full mental breakdown and a conservation degree under my belt, over half a decade later I found myself lost in life, with a lot of pain and nowhere to put it. That’s when I discovered doodling and its therapeutic benefits. 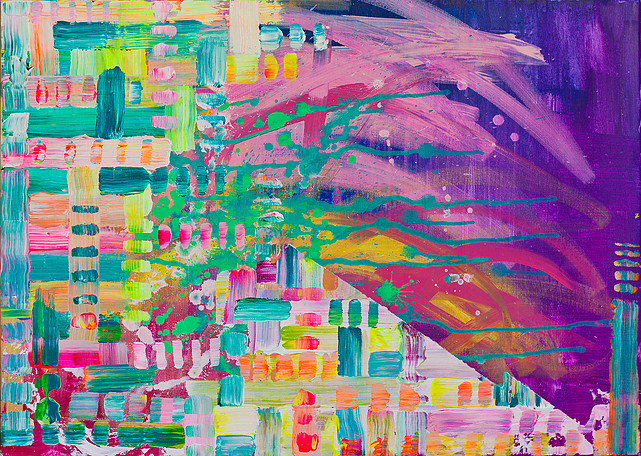 Now that I think about it, I’ve always done this.  Subconsciously in school, in exams, in public when waiting in line.  Margins would be filled with swirls and lines, flowers would pop up behind titles, and I’d find myself absentmindedly filling in all the o, p, d, b and q I could find.

At the time I didn’t know I was doing it, but now I look back, I was clearly trying to divert the pain and boredom away.  I wish I had evidence of my amateur doodles, but of course I burnt all my school books.

I remember that sinking feeling as I’d come out of the trance of my doodle lapse, and I’d look at what I created in complete disappointment.  How could I of only come up with that?  It’s rubbish, messy, and it doesn’t look real or even represent anything.

But now I see, it doesn’t matter what it looks like.

When you use art for therapeutic benefits your goal isn’t the same as a normal artists.  You’re not trying to create a final piece, a masterpiece. You’re just releasing, on a personal level.  The outcome of what has just happened on the paper isn’t what it looks like to you or to someone else, but its what happened during the time you were creating.  You lose yourself in a moment, but you gain a piece you didn’t even know was there.  You find something, or nothing and that’s OK.  The importance is on what happens to you over the course of creating. 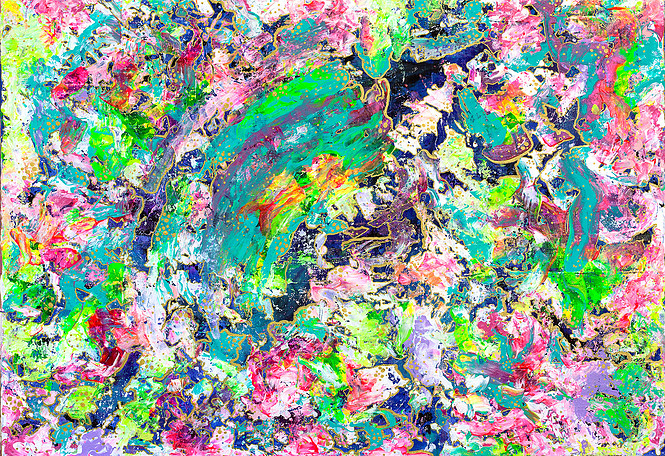 Everyone’s so focused on the finished piece, how it’ll look, what’s the point of the painting, will people like it, will they judge me, what will they interpret.  I had all these thoughts, and I always stopped myself before even trying because I’d worry about the outcome, or other people’s opinions.

And I think this perfectly mirrors the social pressures that surround us as human beings and how we are constantly focused on what other people will think of us.  But much like reality in the sense that it shouldn’t matter what others think of you, when practicing art therapy none of that matters either. Just like you are the person you are for yourself, the art you create can be for you only, no-one even has to see it, and even if they do, you did it for yourself so their opinion shouldn’t matter anyway.

How I’ve used art to deal with negative emotions

Once I discovered doodling was useful to me when I felt uncomfortable I started trying to use it more regularly.  For a long time, I did nothing.  I couldn’t do anything.  I would sit in bed all day, depressed and insane out of my mind.

I would self-sabotage and internally torment myself.  Until I started sketching and painting again.  It began with the doodling in the uncomfortable company of others, to occupying a lot of my time.  I had a choice, I could sit in all the pain and disaster I created for myself, or I could make something from it.  Instead of sitting in utter despair internally or eternally self-sabotaging, I could draw a swirly pattern, and then cover it in aggressive dots.  Or instead of lying in bed all day, I could get some of my favourite colours and smoosh them together on a page.  No matter the outcome. 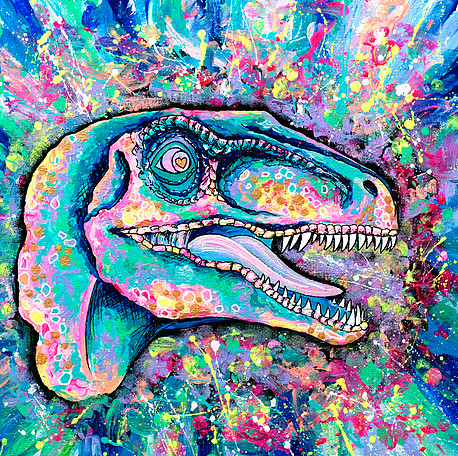 At the end of the day I decided I that if I sit there and all I created is a black dot on a white page…at least I’d done something, rather than nothing.  I had achieved something.  Art gave me something to do for myself when nothing else appeared.

And then it developed.  The more I created crap for the sake of creating something, the more I played with it. That’s when I discovered the emotions I was tapping into.   I’d start with dark colours, not black per se but very dark backgrounds, using my hands to feel something that wasn’t internal I’d finger paint, use my arm as a pallet, and before I knew it I wasn’t feeling all the bad stuff. I was processing it peacefully.  The more I let go, the more I discovered.

And then eventually it became essential to my health and wellbeing. 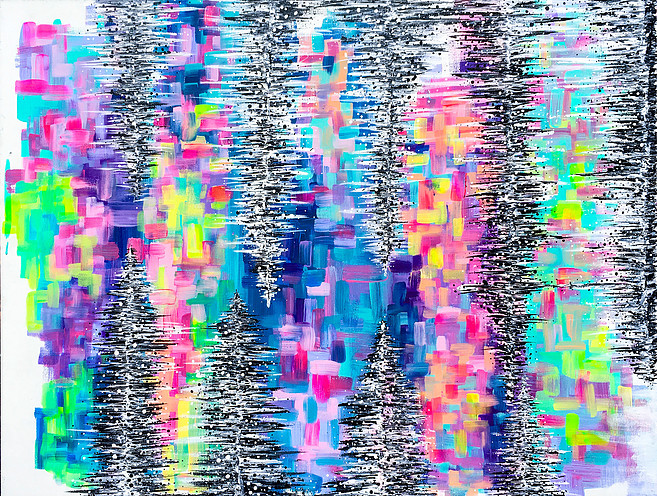 If I have a bad day, or encounter a stressful situation I find it very hard to let it go.  If I don’t tap into my emotions through art, I will just sit there absorbing all the chaos and stress I have encountered like a sponge.  If I don’t divert it somewhere, it consumes me.  So I paint.  It’s incredibly hard to start, every time.  But it’s worth the perseverance.  I can wade through the minefield in my mind.

So I put a pencil in my hand and just see what happens.  Doesn’t matter if all I do is hold it and do a few flicks on the page.  It’s far better than the alternative.

Using art to help others

I’ve used art with many people, and even those not artistically inclined have found it more appealing than they expected.  There was a time in uni when I was struggling, and I was painting on my own.  To lighten my mood, my friends rallied around me and decided to join in.   Lots of giggles and roars of laughter later we finished.

I felt much better, and I received great appraisals from my friends.  One even came back to repeat the process with me on more than one occasion.  It just proves, art can be therapeutic.  You just have to take all expectations of yourself away and just let it be.  It’s like an easier form of meditation.

3 of my favourite mental health pieces 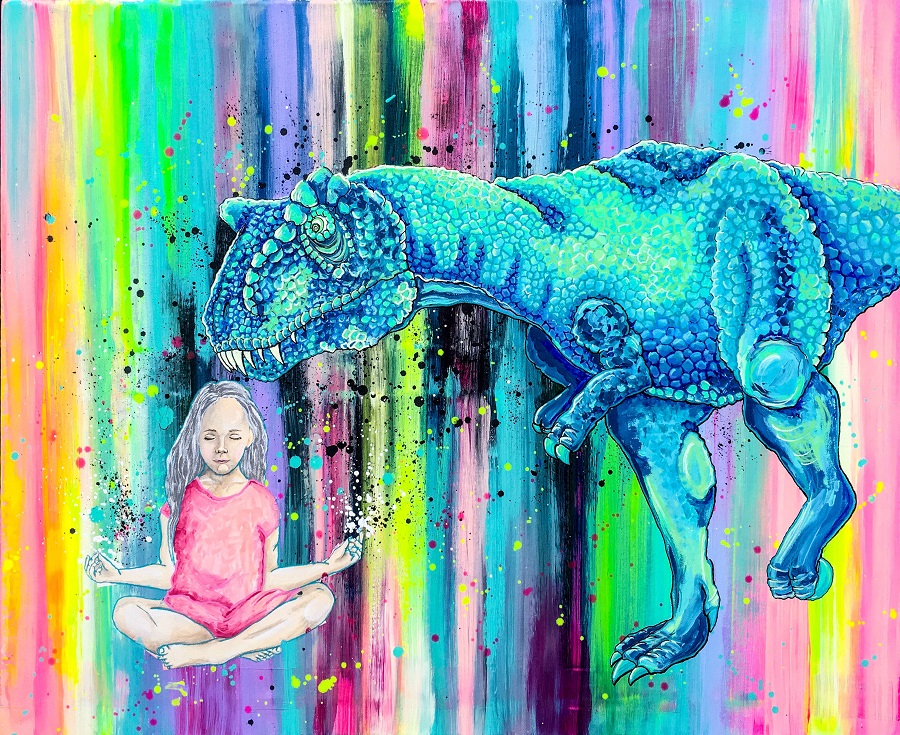 This is a favourite piece of my mine.  I don’t think I will ever be able to sell it.  I was caught up in ‘the black dog’ conversation.  The writer had done a wonderful job of symbolising depression, something I was all too familiar with.  Except, doesn’t didn’t sit right with me.  I couldn’t find my black dog.  I don’t think I have one.  For me I see depression and ‘negative’ mental health, as a hero, not a burden.  I searched inside myself and found I was sick of people portraying people like me as negative.

I changed what would be perceived as a black dog, into something I felt more appropriate to me.  Dinosaurs.  Still monstrous and destructive, giant and overbearing…except my dinosaurs were pink, or yellow, or blue.  My mental struggles were a wonderful array of rainbow colour explosions and huge beasts full of power, and yet they came to me in the most beautiful spectrum of colours.  I no longer fought my demons, I befriended them.  Here I am, sitting in peace, allowing my monsters and feelings to come and go as they please. 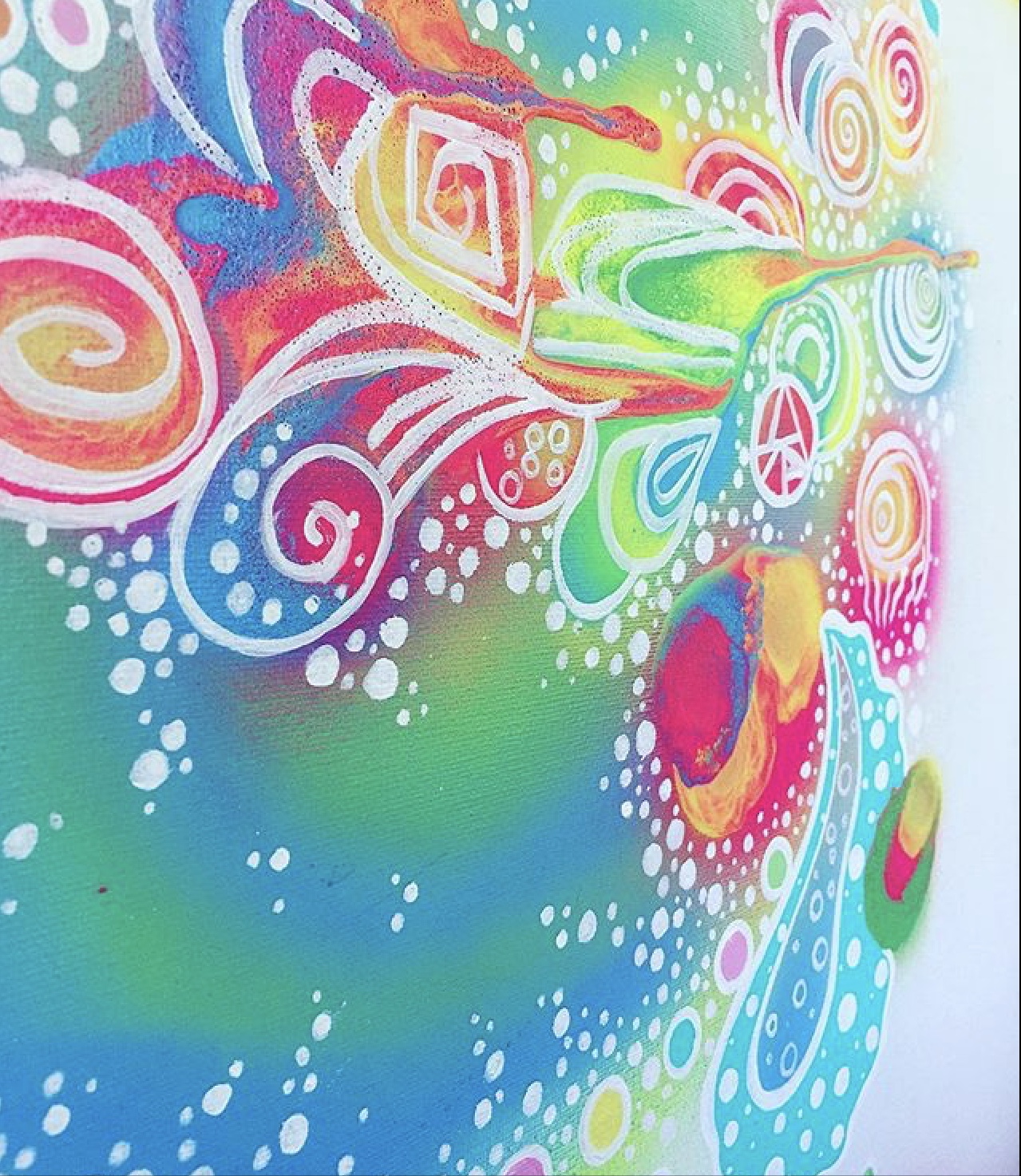 This piece is still in progress.  I started this piece the day I ended a bad relationship.  I wasn’t mad, angry, sad or anything in particular.  I was just feeling a lot.  So I just grabbed my favourite things, sat outside and put paint to canvas.  The background was formed.  I then began the doodles in white whenever I had emotions from this relationship resurface.

It was such a confusing time, I found it so hard to figure out what I was feeling.  The epiphany on this piece came 2.5 years later when a new person in my life praised it.  I explained the situation and my process to which I got a response I was not expecting: ‘Have you ever considered that it was an expression of your freedom and happiness the relationship was over?’.

I’d never thought about it like that, I’d always seen the piece as a negative reflection, despite it being the only painting I’ve ever done without any ‘dark’ in it.  I haven’t touched this piece in over a year.  It is a symbol of what I went through in a moment in my life.  I’m not proud of it, I don’t even want to sell it.  I definitely don’t want to paint over it, and I’m not even sure it’s finished.  It’s just there, in my life, holding those feelings from that moment in my life.  It’s like an external hard drive for my overload of emotions. 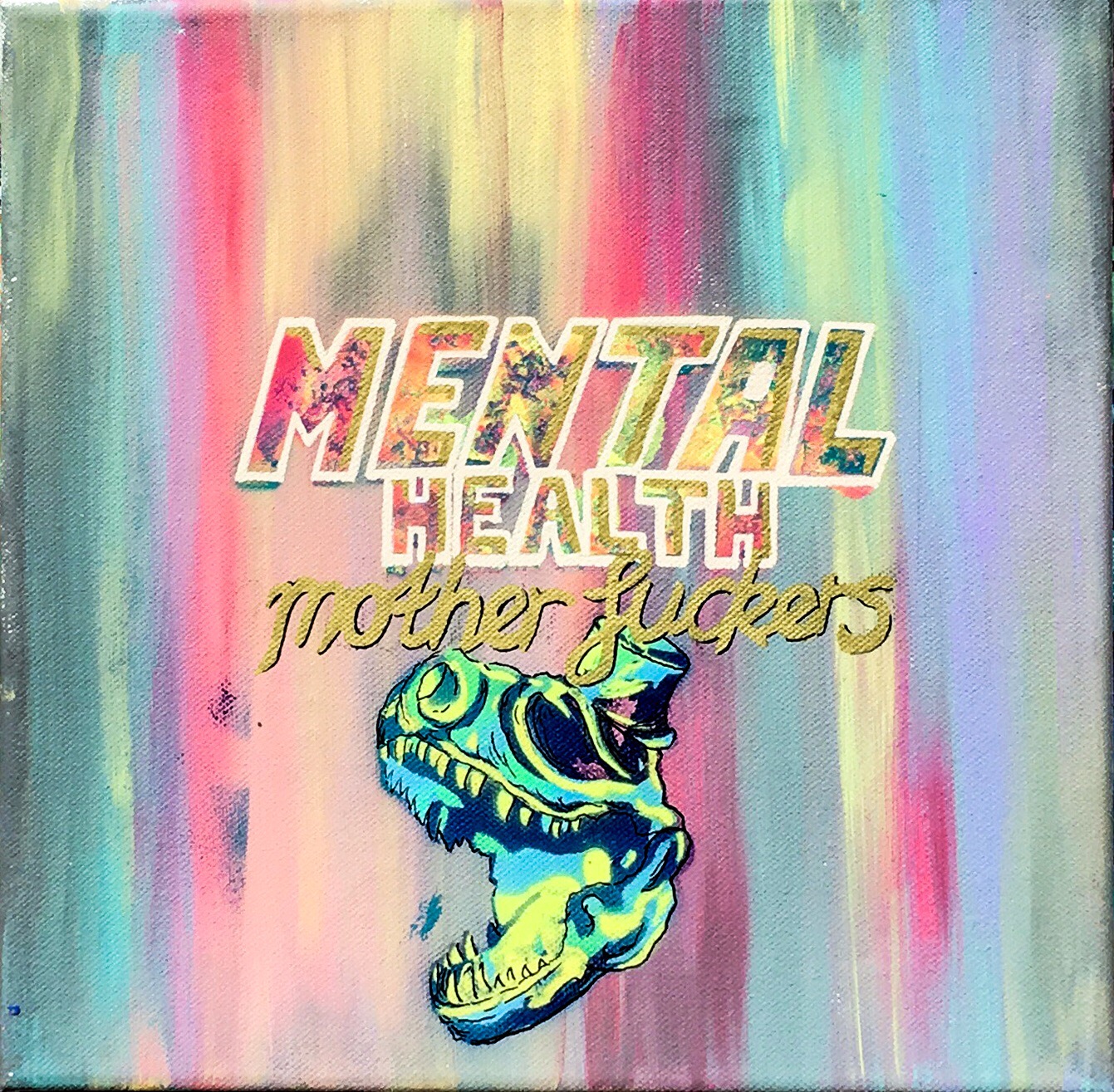 Not my neatest nor my most impressive piece, but still one of my most important to my heart.  It was a quick painting.  I was fed up of people discriminating me for my mental health, and viewing it as something bad.

I myself for a long time was stuck in that mindset, there was something wrong with me, ‘I was bad’, rotten to my core.  Only when I started exploring my feelings and emotions did I realise, ‘hey these are completely legitimate and just as real as your feelings’.

I delved into my mental health, and I turned it all around.  I began to love my demons, I began expressing I was mentally ill to whoever would listen, and I’d find myself constantly surprised by how comfortable I became with it.