Form and Frescoes in Hellenistic Art

Compared with other artistic cultures, very little remains of ancient Greek artwork. Our knowledge comes from the few artefacts that historians have managed to uncover, as well as tales of great paintings from Greek legends. One thing that they were certainly good at, was telling a story!

It seems that art was used to impress and excite the nation, with emperor Pericles building particularly grand and lavish structures with the idea that people would come from miles away to view them. He used public money to fund the ventures and saw it as a way to increase his power and the reputation of his country.

The Greeks loved to add colour wherever they could, painting sculptures, marble statues and creating huge frescoes on the sides of buildings. If it could be painted, it was. They stopped short of painting floors, instead decorating these with brightly coloured tiles and rocks. These intricate designs were very expensive to create and so only the wealthiest of citizens could afford to have them in their homes.

The Rise of Greek Art

The Greek alphabet was formed around 900BC and it marked a huge change in Greek culture. Early artworks included temples and public buildings dedicated to religion and metal vases used for both funeral ashes and male social events. These vases were always painted – at first, geometric patterns were in vogues, but with the influence of Egypt, mythical scenes would tell a story. The Greeks took their time in perfecting the image of the human body, which would be shown naked or clothed, in the form of sculptures, carvings or silhouette paintings. They were much better at depicting the human form than other cultures of this time. Corinthian columns were also created very early on and became a signature part of Greek building.

The death of Alexander the Great signalled a new time in Greek history. Having conquered most of the world as they knew it, with the Greek empire stretching from Greece to India, artists had been exposed to a huge number of different cultures and traditions, which naturally influenced their work. 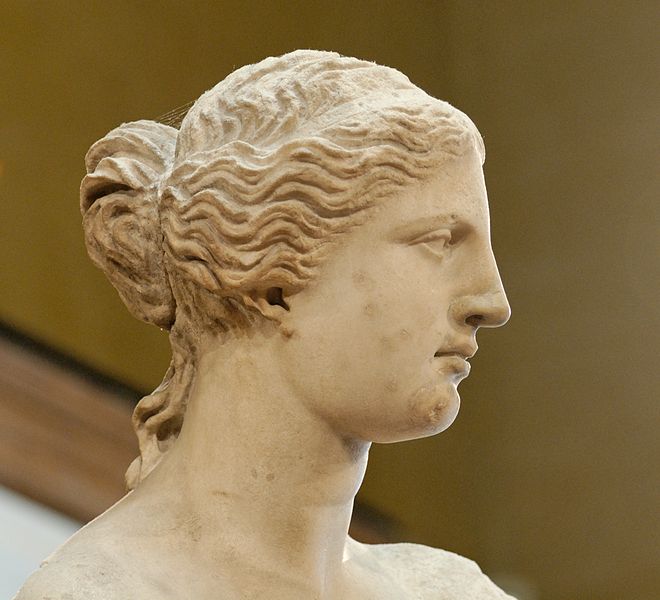 When their emperor died, his generals took it upon themselves to divide up the Greek empire, in order to ensure their artistic influence reached every corner. Sculptures and buildings were commissioned far and wide, with the human body being a real obsession. The statue of Venus de Milo was considered to be the absolute form of perfection and was gifted to the king of France when it was uncovered many years later. It now sits in the Louvre museum in Paris and is thought to have once been painted in beautifully bright colours, befitting with the fashion of the time.

Unfortunately, very few paintings have survived this era, due to natural forces, but many mosaic floor images are thought to have been copied from wall frescoes. It is believed that these pictures make use of the same styles seen in sculpture, with figures twisting and turning to provide a unique viewpoint. Every artist worked hard to provide a glimpse into the object’s emotions, using facial expressions and gestures to convey a feeling, while ensuring a realistic interpretation of the scene.

While most frescos were lost, there are one or two surviving examples of Greek painting. The Pitsa Tablets actually date back to the Archaic period, around 150 years before the Hellenistic period. Found in a cave near Pitsa, which may have had the climatic conditions required to preserve them, they are thought to be four table tops, painted with mineral clays, and are the earliest known example of Greek paint work. Experts believe the outlines were drawn first and then the eight colours were filled in, with no use of shading. 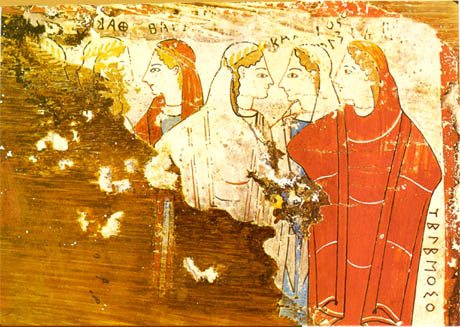 Two of the tablets are in better condition than the others. One shows a group of nymphs, probably a religious scene, with a sacrificial lamb. The names of two of the nymphs are inscribed on the tablet: Euthydika and Eucholis. The second tablet has more text, thought to be a dedication to the nymphs. It also features a group of female characters. Both are thought to be lower quality items, perhaps belonging to a poorer family. 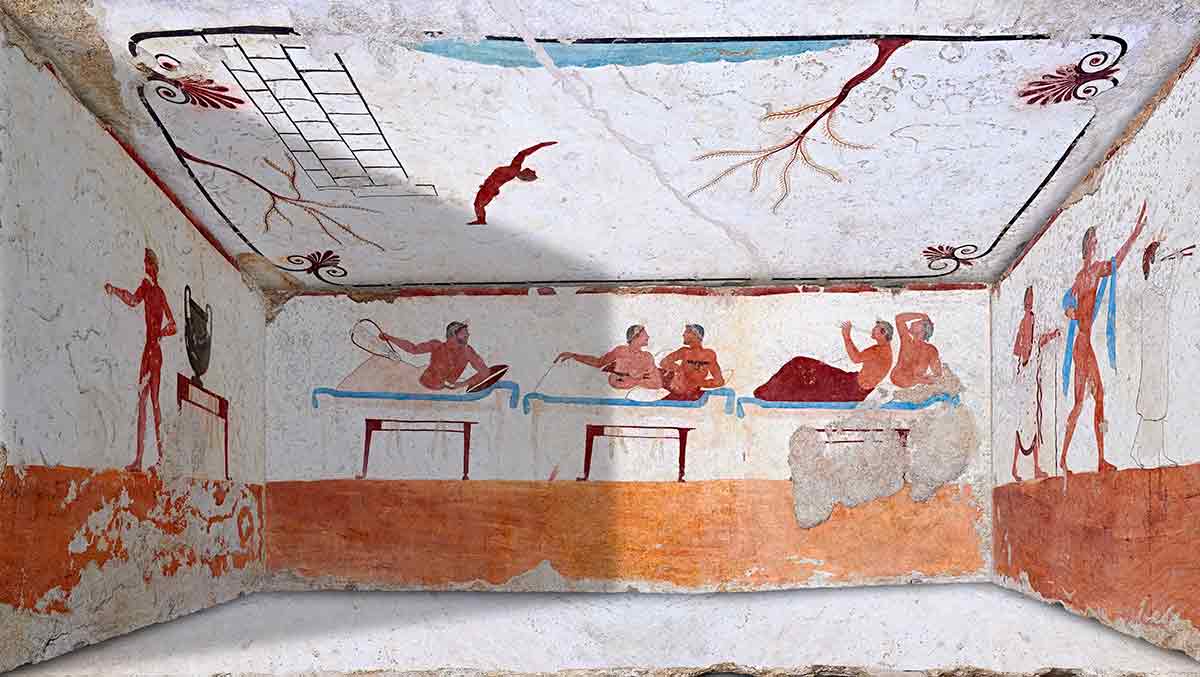 Another surviving painting has been found on a tomb at Paestum. The Tomb of the Diver dates back to the classical period – a date that has been confirmed by an old vase found on the tomb. It is of much finer quality than the tablets and made up of five painted slabs. The main image is of a person diving into the sea, thought to be a symbolic reference of death. The other slabs feature homosexual lovers and men playing games and music. While other tombs of the time have since been uncovered, this is the only one that is still painted, making it a very important piece.

A few pottery artefacts still remain from the Hellenistic period. It is thought that the decoration of these pieces was not considered as important in these times, and the standards at which they were produced suffered somewhat after the death of Alexander the Great.

Vases were generally painted completely black and then decorated with a floral design, while pots were given a little more adornment, with images of animals and mythical creatures. This may simply have been a reaction to the incredible popularity of these items, which were often exported to those who appreciated the Greek style. It was a notable difference to earlier times, where geometric patterns and bold scenes were painted in order to draw attention to the item.

The painting on these pieces probably survived better that the wall murals since the items were made out of clay and then fired to get the finished, durable effect. They used a method known as ‘black figure’ to decorate their pots, which involved painting with a damp clay material. When heated, the entire pot would turn black, but when cooled again, the painted area would return to its original terracotta colour. This meant that black and red were the dominant colours in pottery work, but details were carved into the damp mixture to make art that was actually very intricate.

One stand-out piece is a Paestum vase in the British Museum. Made for mixing wine and water, the image painted on the front tells the story of Alkmene, whose husband tried to burn her alive after discovering she had been raped by the King of the Gods, Zeus. Zeus saved her at the last moment by sending a shower to put out the flames.

Thankfully, historians have been able to turn to the Egyptians to gather an idea of what Greek paintings would have been like in the Hellenistic period. The Egyptians spent a long time exploring other cultures and basing their own artwork on the sculptures, paintings and statues that they saw.  It is thought that the Egyptian mummy portraits were influenced by Hellenistic design since the images are so lifelike, depicting an actual, individual person, rather than a traditional mummy.

Hellenism in the Romans

The Hellenistic period came to an end when the Romans took control of the Greek empire, but not before they had had a chance to admire their artwork. Like the Greeks, the Romans enjoyed a wall fresco, but they had a very different style to their pictures.

There is a Roman villa in Boscorealev, Italy, that is still visible today and is thought to have been influenced by Greek frescoes, with images of affluence, privilege and philosophy. Although not a true example of Greek work, it does provide a reliable insight as to what it may have looked like.

Where to See Greek Painting

The lack of surviving pieces means that any chance to view Greek painting must be appreciated. The British Museum has a number of painted pottery pieces, while the Pitsa Panels can be seen in the National Archaeological Museum in Athens. If you are more interested in sculpture, the Venus de Milo is a stunning example that can be seen in the Louvre in Paris.